“The obstacles they have overcome and the resolution they have shown is unbelievable,” said Eric Clark, CEO of the Guardian ad Litem Foundation, presenting the Triumph Award for the first time. “I’m in awe of them and inspired.” 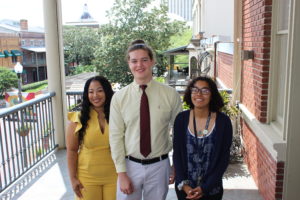 All 18 nominees have been represented by Guardian ad Litem volunteers around the state. To compete for the award, they wrote applications and essays, and this week the finalists traveled to Tallahassee to serve as messengers for the Legislature and accept their honors, which include scholarship money and laptop computers.

The first-ever winner of the Triumph Award is Robert Hurley, the valedictorian of Boca Ciega High School in Gulfport. He has a 4.6 GPA, is active in clubs, plays and musicals, and is trying to decide whether to attend Yale or Stanford. He’s interested in science and math, and is leaning toward studying medicine. He also wants to give back by “telling kids they can make it” to motivate them and, perhaps, by adopting a child.

The first runner-up is Jas Marie Prophet, a student at New College in Sarasota. She has a full scholarship and wants to be an oncologist, pharmacist or scientific researcher. This summer, she has a paid internship researching plant biology at Cornell University. As the first person in her family to attend college, Prophet pays attention to other first-gen students and has sparked a pen-pal arrangement to connect incoming freshmen with upperclassmen.

The second runner-up is Angela Dawkins, who will graduate from Forest Hill Community High School in West Palm Beach next month. A poet and motivational speaker, her dream is to attend the University of South Florida and become a lawyer advocating for children. Dawkins entered foster care on the day she was born. Her difficult childhood “made me who I am,” she says. “It gave me a voice for people who are not capable of having a voice.”

“Our Guardian ad Litem volunteers are also amazing,” he said. “Every day I hear stories of the young people they’ve helped. They truly have the child’s best interests at heart.”