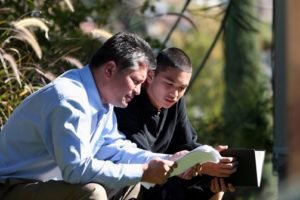 You will recall during the 2017 regular session, the Guardian ad Litem Program championed 3 substantive proposals and 1 significant budget proposal, which have all been enacted.

The Keys to Independence Act, which helps children in foster care obtain drivers licenses was improved, and made permanent.

The Justice’s Best Friend Act allowing the use of facility and therapy dogs in dependency cases is now statewide.

Being A Foster Parent is a Walk in the Park Act gave free state park fees for foster families and families who adopt a child with special needs.

The GAL Program is championing 3 substantive and 2 budget proposals this upcoming legislative session.

Florida Statutes require that in addition to the appointment of a guardian ad litem, the appointment of an attorney for certain children with special      needs is required. These attorneys generally come from the Special Needs Registry and are paid $1,000 per year and reimbursed for case related due process costs. However, prior to the Court appointing an attorney from the registry, the court must request a recommendation from the GAL Program for an attorney who is willing to represent a child pro bono.

Currently, statute allows for reimbursement of case-related due process costs only of Special Needs Registry attorneys, and not for attorneys willing to serve for free. This bill attempts to rectify that by allowing reimbursement for both attorneys from the registry, and those serving pro bono.

The Direct Support Organization (DSO) bill (SB 222/HB 6021) which has been sponsored by Senator Aaron Bean and Representative Cyndi Stevenson is crucially important to the GAL Foundation.

When the Legislature approved the creation of the DSO (which is the GAL Foundation), there was an automatic repeal provision. If the Legislature does not act, the DSO will expire on October 1, 2018. The DSO is an important partner for the GAL Program in furthering its mission, and can also accept grants and donations from private organizations and individuals. This bill deletes the automatic repeal provision.

The “Engaging Incarcerated Parents” bill (SB 522/HB 281) which has been sponsored by Senator Aaron Bean and Representative Patricia Williams (Representative Kimberly Daniels is a prime co-sponsor, and Representatives Julio Gonzalez and Gayle Harrell are co-introducers) will address delays in permanency for children caused by failure to adequately involve incarcerated parents in the case plan.

This bill is consistent with existing law requiring participation of parents in case planning, but gives specific direction to engage incarcerated parents. DCF will be required to attach a list of available services at the correctional facility to case plans, parents must be advised that even though they are incarcerated, they must make progress on their case plan (including planning and completing services offered at the facility, and must communicate with their children).

The bill also specifies that if a parent is released during a case plan, they plan should identify services and referrals to be completed upon the parent’s release, and if a parent becomes incarcerated after a case plan is developed, the plan must be examined and modified if the incarceration impact permanency.

The first will enable GAL’s to stay on cases when a child is placed outside his circuit. Due to the number of children in out of home care has increased, more and more children are being placed outside their home circuits. The GAL Program is requesting approximately $330,000 in recurring revenue to reimburse volunteers for extraordinary or hardship travel expenses.

Secondly, the GAL Program is seeking approximately $1 million in recurring revenue to fund additional CAMs to support the 18 Early Childhood Courts (commonly referred to as “Baby Court”), which use reduced caseload, evidence based practices to mitigate trauma for children 0-3 through developmentally targeted strategies.

The first budgetary proposal was was accepted and the GAL Program will receive the $330,000 that was requested.

The second budgetary proposal was aligned with a bill, and unfortunately, that bill do not pass. Therefore, this second budget request will not be fulfilled at this time.

Please feel free to reach out anytime and have a wonderful 2018.