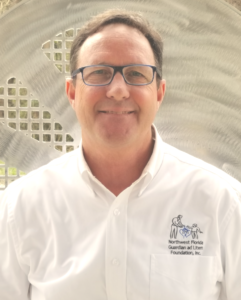 David is the son of a retired US Army officer. Much of his youth was spent moving around the country to various military installations. He eventually settled in central Florida and graduated from Georgia Southern University with a degree in Accounting. He joined the US Navy in 1979 and was designated a Naval Aviator in 1981. During an instructor tour in Pensacola in 1985 he met nursing student (now nursing faculty at UWF), Jill Jackson, and they married in 1986. David joined American Airlines in 1991 while continuing his Naval service as a reserve flight instructor. David and Jill became GAL volunteers in 2013. They have four grown children spread across the world. David became active with the NW Florida GAL Foundation in 2016 and is committed to the mission of supporting the GAL program in the First Circuit, and now statewide.